TALKBACK is a hybrid arts installation that aims to explore the intersections of race and identity. The main exhibit is a video collage titled TALKBACK that features interviews with sixty-six Americans and Australians, including prominent artists, who duscuss aspects of their histories and aspirations. The project seeks to encourage dialogue about belonging, blackness, whiteness and intergenerational continuity and change. 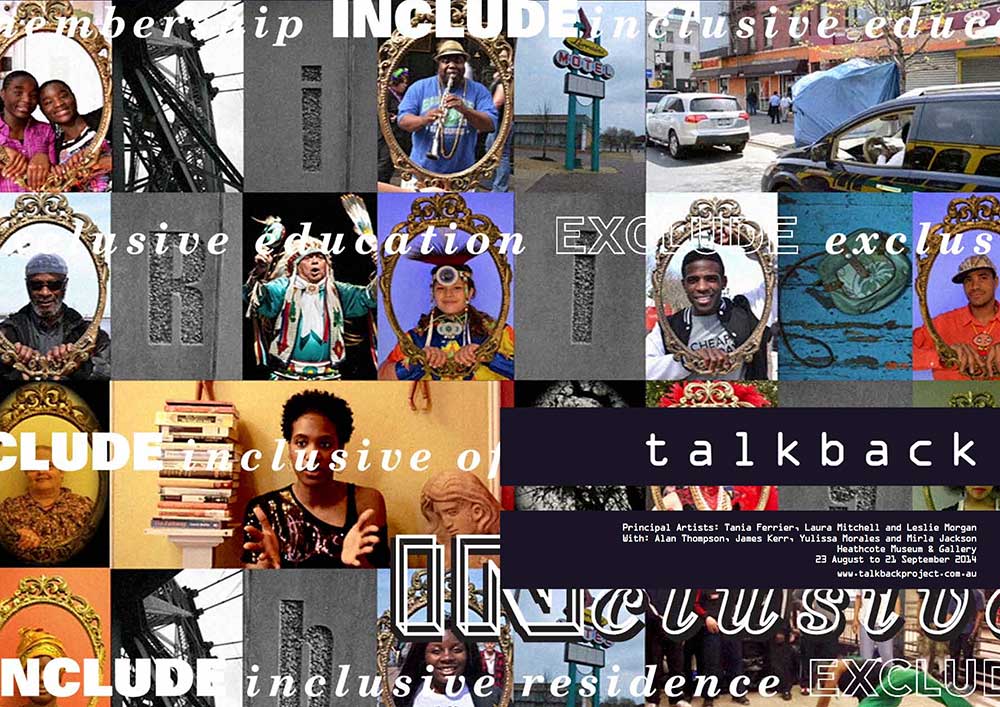 Talkback shows at Heathcote Museum & Gallery, Perth, WA from 22 August to 21 September, and at the Academy of Fine Arts, Lynchburg, Virginia, USA in 2015.

Dr Leslie Morgan’s trans-disciplinary painting and writing concerns race, diaspora, migration and whiteness. His paintings are held in public collections and he is author of two books Illegal Action (2005) and The Significance of Diaspora Politics in the Visual Arts (2008). http://lesm48.wordpress.com/about

Tania Ferrier’s painting practice has expanded into the use of video to explore race relations in installations that transgress the boundaries between the art gallery and museum. Her work is held in many public collections including the Art Gallery of Western Australia. http://www.taniaferrier.com.au

Laura Mitchell is a visual artist, designer and musician. Her art practice spans painting, sculpture, digital media and public art and is currently exploring civil rights and migration. Her work is held in public collections in the USA and Australia and she is artist and co-author of The Elephant of Eastbury (2011). http://www.laura-mitchell.com.au

Alan Thompson is a filmmaker and founder of Warped Time Productions. He is the technician and sound co-editor for the Talkback video collage. http://www.warpedtime.com

James Kerr is a photographer and has published three books of black and white photography and has collaborated with Tania Ferrier as stills photographer on her most recent projects. http://www.jameskerrphotography.com

Yulissa Morales and Mirla Jackson are two young photographers who collaborated with Tania Ferrier in the USA in 2012 on photography and research for Talkback.